My online and Etsy friend from rikrak studio challenged her blog readers to list their 10 favorite things here. 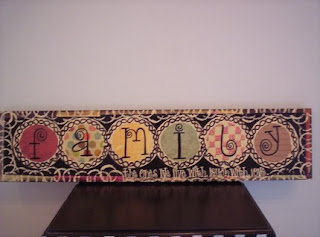 Family by Renee's Funky Country
1.  Family and Friends:  I love my family and friends.  We get together when we can for the good company and good food.  And the support.  And the teasing. 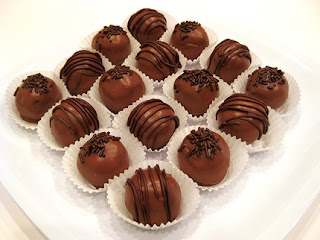 Double Chocolate Fudgy Cake Truffles by lollidreams
2.  Chocolate!!!  I love chocolate almost as much as I love my family and friends.  It's yummy.  It makes me feel good.  It soothes me when I'm stressed.  It gives me energy. 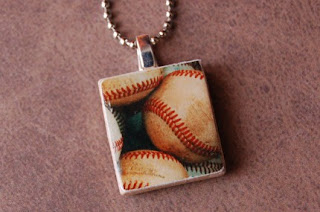 Baseball Scrabble Tile Pendant by threescoopsoflove
3.  Baseball:  My dad loved baseball so I watched and listened to baseball the whole time I was growing up.  I listened to Vin Scully broadcast the Dodgers games until the Tucson radio stations no longer carried those games.  I used to keep score while listening on the radio or watching on TV.  Now I love baseball because it's fun to watch and listen to while I'm doing grown up tasks.  It's comforting (except when the Diamondbacks go into a slump).  I watch it with my Significant Other and we watch it with my mother when we go to visit her.  When I'm ready for a break from my work, I can sit and watch for half an inning (or so). 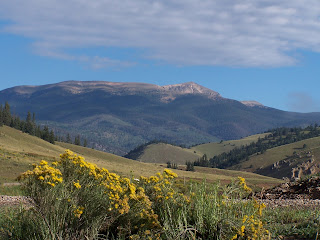 Valle Vidal in northern New Mexico
4.  Getting Outdoors:  We love to get out of the house and into the great outdoors.  Hiking, backpacking, camping.  We like it when life gets simpler.  No TV.  No computer.  No convenient phone.  You concentrate on the next meal and what will we do today? 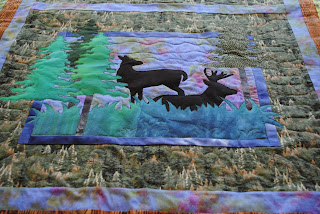 The Charlie Pirtle Memorial Raffle Quilt that I made for the 2010 Becoming an Outdoors Woman in New Mexico workshop.  It's based on the Dusk 'Til Dawn quilt pattern designed by McKenna Ryan.
5.  Sewing and Quilting:  I love to sew and to make quilts.  I get to play with colors (see below) and fabric and textures.  When I get to do that, I make things that are pretty.  Sometimes, those pretty things are even useful.  And it brings some family and friends together, too. 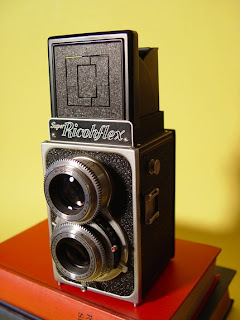 Super Ricohflex camera by collectorsville
6.  Photography:  I've always enjoyed taking photographs, starting with the Brownie that my parents gave to me.  This camera above reminds me of the cameras that my parents used when I was little.  I have those cameras now.  I have a new Nikon now and I took a brief photography class, so I know a little bit more than I did before.  I'm enjoying trying to put those things into practice.  Oh, but the remembering them is so hard! 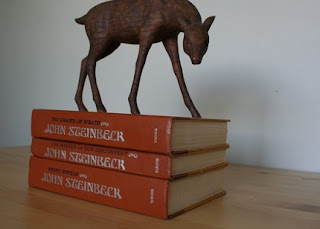 Vintage Collection of Steinbeck books by scoutHOME
7.  Reading:  I started reading with my dad when I was very young.  I love the entertainment and the learning.  What pleasure I get from books and stories!

Beef Roast for Company by $5 Dinners
8.  Food and Cooking:  I LOVE to eat!  I love to cook, too.  I also love to cook on a budget.  I have plenty of cookbooks, but I enjoy getting ideas from the Internet, too. 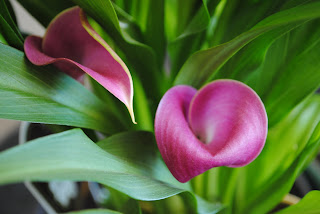 My friend Kim's calla lillies
9.  Color:  It soothes and excites and warms and calms.  I love Arizona sunsets and sunrises.  I love flowers and other bits of color in the desert. 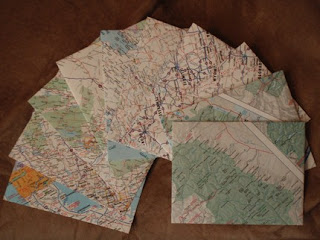 Map Envelopes by DrakonsLair
10.  Travel:  We love going places.  I guess I come by it naturally, as my parents loved to travel and I started before I was two months old!!  I like to see new places.  I like to eat new foods.  I love to get a taste of local culture.  And . . . I love being away from home.  And . . . then coming home again.

So, what do you think of my favorite things?  And now I want to know--what are your favorite things?  Think about them, enjoy them, and then share them.  I'd love to hear yours.
Posted by Denny1600 at 4:43 PM 1 comment:

Road Trip!!!--Lone Pine, California and nearby deserts and mountains 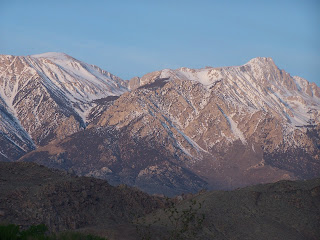 Do you like to take trips to places where you spent pleasant times in the past?  Do you like to do nostalgia trips?  My significant other likes to do that once in a while.  I like to go along because he is so interested in where we're going.  It's fun to see him get so absorbed.  I also love to see things that make up part of his life.

He decided that in April we'd head from our home in southern Arizona to Lone Pine, California and the desert nearby.  That's where his father had some mining claims (in the desert near Darwin, California).  My SO remembers that his mother and father walked and wandered all over the hills near those mining claims.  He went along for the trips as a young guy, so he remembers the trips, but he remembers that things were much bigger then than they are now.  Sound familiar?

Anyway, we got his mother (who's in her mid-80's now) to go along with the idea of the trip to the mine and away we went.

Here is the Arizona desert near Gila Bend.  Wildflowers!! 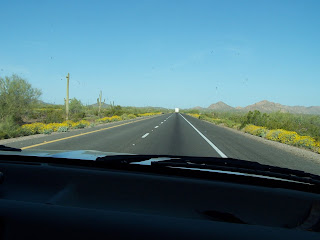 It's many mind numbing hours from southern Arizona to Lone Pine, California, but the stunning views of the eastern Sierra Nevada make up for the stiffness from sitting all those hours.  Mount Whitney is in two of these photos below. 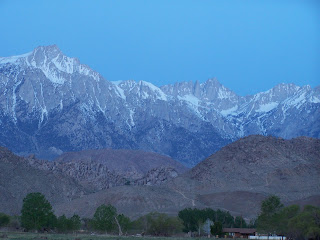 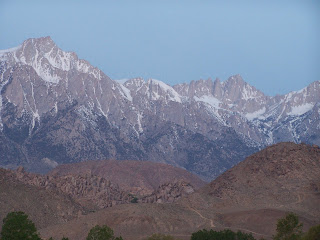 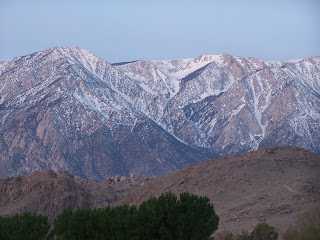 The morning after we arrived in Lone Pine, we headed east, away from the Eastern Sierra and into the desert.  We drove to the old ghost town of Darwin and then back west into the hills nearby.  We meandered around the desert and discussed where we were and where we should turn.  We backed up and tried a different road.  Then SO's mother said, "This looks familiar.  I remember going past these tailings piles."  Over the edges of a couple of ridges, across a small valley, then partway up the other side.  We arrived!! 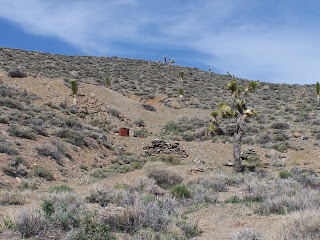 It doesn't look like much, you say?  Oh, but wait.  It was a place to work the land in hopes of finding gold and other minerals.  It was a place where my SO's father spent many hours each year, digging, blasting, and improving as required by the mining laws.  He escaped the big city where he lived.  He got in touch with his roots and searched for gold as his grandfather did years ago in northern New Mexico.
My SO's mother got out of the truck with the help of a step stool, donned her son's hat, took my hiking stick, and proceeded to explore familiar territory which she hadn't visited in many years. 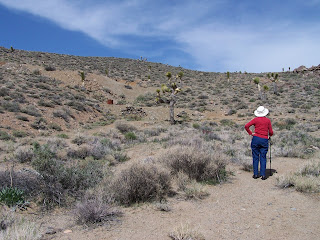 We found some spots of color near the diggings. 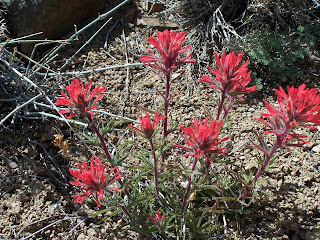 And marveled at the blossoms on the Joshua trees. 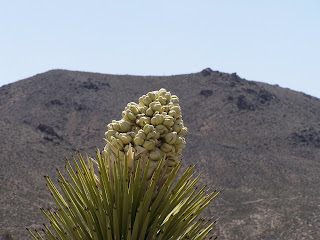 Here we are next to the monument marking part of the mining claim boundary.  His mother sent us up here so she could take the photo! 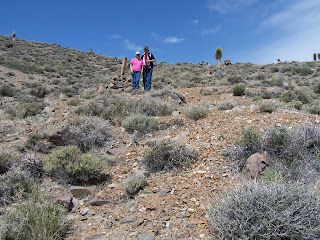 The collapsed mine shaft that he worked so hard to dig and blast and reinforce. 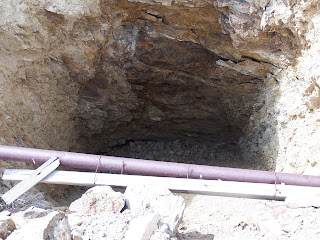 The view from the main mine shaft back down the hill to our truck and the "driveway." 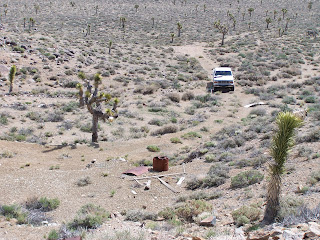 It was interesting and fun to wander around and look at the remains of the mine out here in the middle of nowhere.  Truly!  There were many artifacts and reminders of days gone by--rusted cans, weathered wood, piles of rocks.  We wandered and explored and turned over rocks and tin cans.  We sat in a chair we placed near the truck.  We had a snack, a swallow of water, and a last look around.
Then it was time to go back to the truck and head back to the "big city" of Lone Pine. 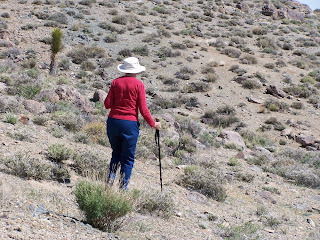 We all enjoyed the visit to the old mine and hope to visit there again sometime in the not too distant future (but at least after summer!).
Make sure you get your own outdoor and nostalgia adventures while you can and while those who might enjoy it with you will go along!!
Posted by Denny1600 at 3:38 PM 1 comment: